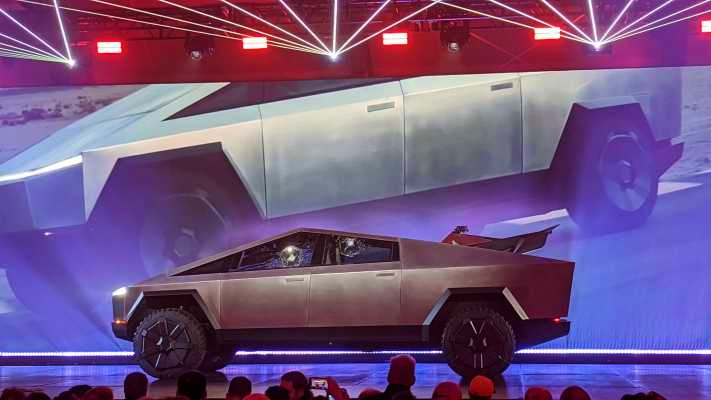 Musk has officially promised the Cybertruck and the Tesla Semi in 2023. "We're going to move to . . . scale that no company has ever achieved in the history of humanity," he said. Among the planned future product will be a dedicated robotaxi [that] is gonna look quite futuristic, and the Tesla robot Optimus, he said, which will help create "an age of abundance . . . that's gonna transform the world to an extent even greater than the cars." This, too, he said is coming next year. Following that announcement, Musk rolled out the first Texas-built cars next to a sign saying "Deliveries begin now."

Showing the Cybertruck, he said, "It's been an intense couple years, but we're gonna have this for you next year, and it's gonna be great." He and design chief Franz von Holzhausen pretended to consider, then reject, the idea of smashing its window with a hammer as they famously did at the original reveal of the Cybertruck in 2019. Musk also doubled down on his enthusiasm for Full Self-Driving, saying it will "revolutionize the world," and promised that it will go into wider beta usage during 2022.

The Giga Texas facility near Austin where Tesla expects to build the Cybertruck is having a big party tonight. Musk promised he would have an announcement as part of the grand opening festivities. There is speculation he will have more to say about the truck.

At the time the plant was first announced, in 2020, Musk said the 2500-acre facility will be where Tesla will build Model 3 and Model Y vehicles that will be delivered to the East Coast, along with the Tesla Semi and the Cybertruck. More recently, the company acknowledged that 2022 would not see any Semi or Cybertruck vehicles built. In January Tesla took the edgy electric truck's production timeline off its website entirely and, until today, had not given further information about when (or if) it will be built.